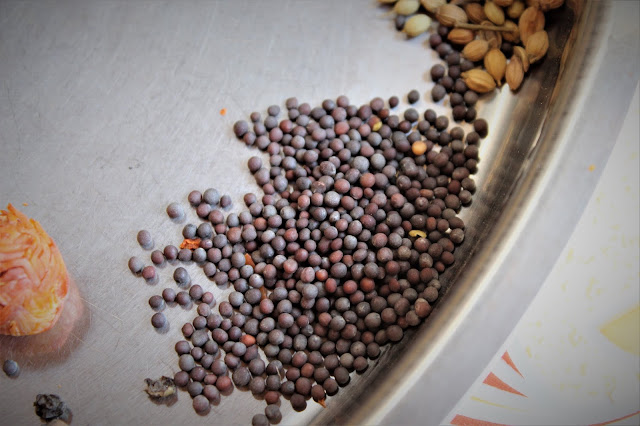 Spice no. 4
Mustard we know it as the tiny seeds in the phodni or tadka without which our food is incomplete. It is loved right across India, In the South that extra tadka is the highlight of chutneys and everything else. Bengal and North East's most beloved spice. They cannot function without it, the shorshe bata is a must in fish preparation and the oil has to be Mustard. I  myself being Maharshtriya love my groundnut oil and my palate required a lot of maturing before I learn to appreciate mustard oil. That too thru Kashmiri cooking. I learnt that smoking the oil reduced its punjency and brought out the flavours beautifully when I learnt to make Taher from Anita Tikoo. Then a conversation I recollect with the food writer Marryam Reshi who is married to a Kashmiri that for all their love for Mustard oil but they had very little to no love for the mustard seeds. She even goes to say in her book, The Flavour of Spice that Kashmiris don't use even a spoonful of Mustard in the whole year!
I was in Hampi when I heard the guide tell about the King's Ganesh called Kadle kalu Ganesha and the common man's Ganesh called sasave kalu Ganesha. Such a vivid comparison. Mustard has always been the representation of tiny. Tiny but powerful. Gujaratis befriended it. They use so much besan in cooking as thickner and as a major ingredient for the farsan that Ayurvedic balance is a must with a tadka of rai. Rai is potent gas shooter. It makes everything easy to digest.
While in Bangalore I met families from the Vidarbh of Maharashtra that made koshimbir with pounded mustard in dahi. A Mumbaikar rarely gets an insight into remote regional Maharashtriya cuisine. So this came as a surprise. Then another of my favorite use of Mustard is in the Sasam from the coasts of Goa and Karnataka. A paste of mustard, coconut and red chilies is mixed with fresh sweet n sour cut fruits like mango, pinapple and grapes and eaten as a palate changer. The same or similar paste is cooked with raw mango to make a curry called sasav. That is true dedication to a spice, when the dish itself is called by its local name.
You can tell a guy is from the North Indian state when his deo is overpowered by the smell of sarson Ka tel. Jokes apart mustard oil is considered a garami wala oil and best for massage in winter. Alleviates aches n pains.
I stock many different oils in my pantry and one day my friends came to stay over unplanned and my Friends husband was thrilled to have a masoor dal, rice and aloo shedho with a dash of mustard oil on it just out of the blue cooked by me. I need not say he is a bengali. Yes and it surprised me that they had a tradition of eating raw oil too like Maharashtriya enjoy their peanut oil on certain dishes like ukad and chutneys but that is for another story.
Among Kolis we don't use Rai in tadka but it is part of our masala. My favourite is a Khamanga green chili, hing - Mohri Phodni chi sukki batata bhaaji. I could eat it as a snack. You learnt a new word for mustard here.
In Maharshtra we also use Mustard paste to apply on the belly button of a baby with colic as you cannot feed the mustard to the baby and it works like magic. Talking about magic, mustard seeds along with salt and alum or phatkiri is held in the palm of the hand and waved across a person who has travelled or has had an exposure to evil eye and dropped in the hot embers of the chulha. It removes the evil eye is the belief. However its is nothing but aroma therapy at work. The mustard releases the pungent oil and lifts the mood. That's what makes babies smell good after this Olavni of mustard seeds and salt and phatkiri.
While many times we have learnt that a certain spice travelled from across the world and came to India Mustard is home grown and it is native plant across the world so one less dispute for the World. So there is English Mustard, Dijon and far Mexico too. I wonder if our Sarso da saag loving Punjabis were attracted to Canada because it is the largest producer of Mustard or did the Punjabis make it the largest producer of Mustard?
Posted by Anjali Koli at 11:04 AM No comments: