It has taken me two weeks to recover from #IFBM2014 and the magical experience!

Meeting the bloggers in person after knowing some of them over years, I mean almost 8 years! Learning quite a bit from experience sharing sessions to professional sessions and cooking Master classes. There is so much to share with you, my readers and will do it day-wise as it happened at the meet, while I relive those moments and put it down here to go back to the sweet memories later.

It began in June, when Arundati (Escapades) introduced the idea of a Bloggers meet to me on chat. I was then thinking well, its been 2.5 yrs since I visited BLR and this will be a good reason to go back. I was naive to think it will be like a re-union or I mean first-union of online friends, you know what I mean eat, talk and have fun. OR that it would be like the Business conferences that I have been so used to, everyone sells their gyan and wares and goes back home smiling, I feared this though.

Boy! I was wrong. Arundati had teamed up with Aparna (My Diverse Kitchen), Revati (Hungry & Excited) and Nandita (Saffron Trail). We loving call them the Fab4 now and they got a huge applause and numerous hugs for outdoing themselves in giving us bloggers this experience that we will cherish for many years to come. 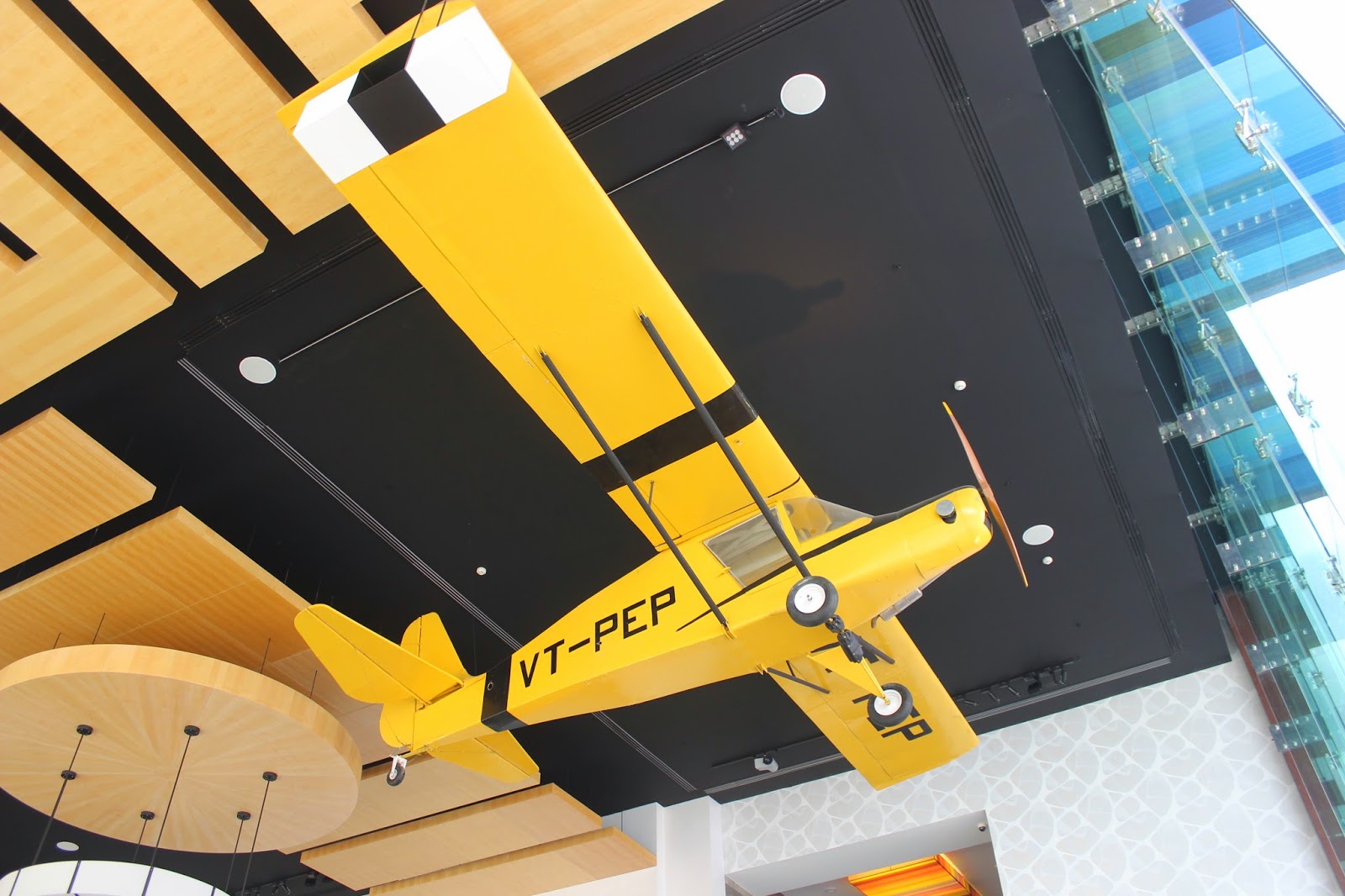 As I prepped for my trip, there was a  news flash saying there would be a Bandh in Karnataka on 31st July. Ha! exciting start I thought, as I winced. I landed is BLR to find the city's airport quite and Vayu Vajra had changed colors from the flaming red to a calming green, I'm talking about the airport bus service. In an hour of a pleasant, traffic free ride the polite conductor dropped me at the Domlur bus stand. I dragged my bags to Aranha homes which was just around. 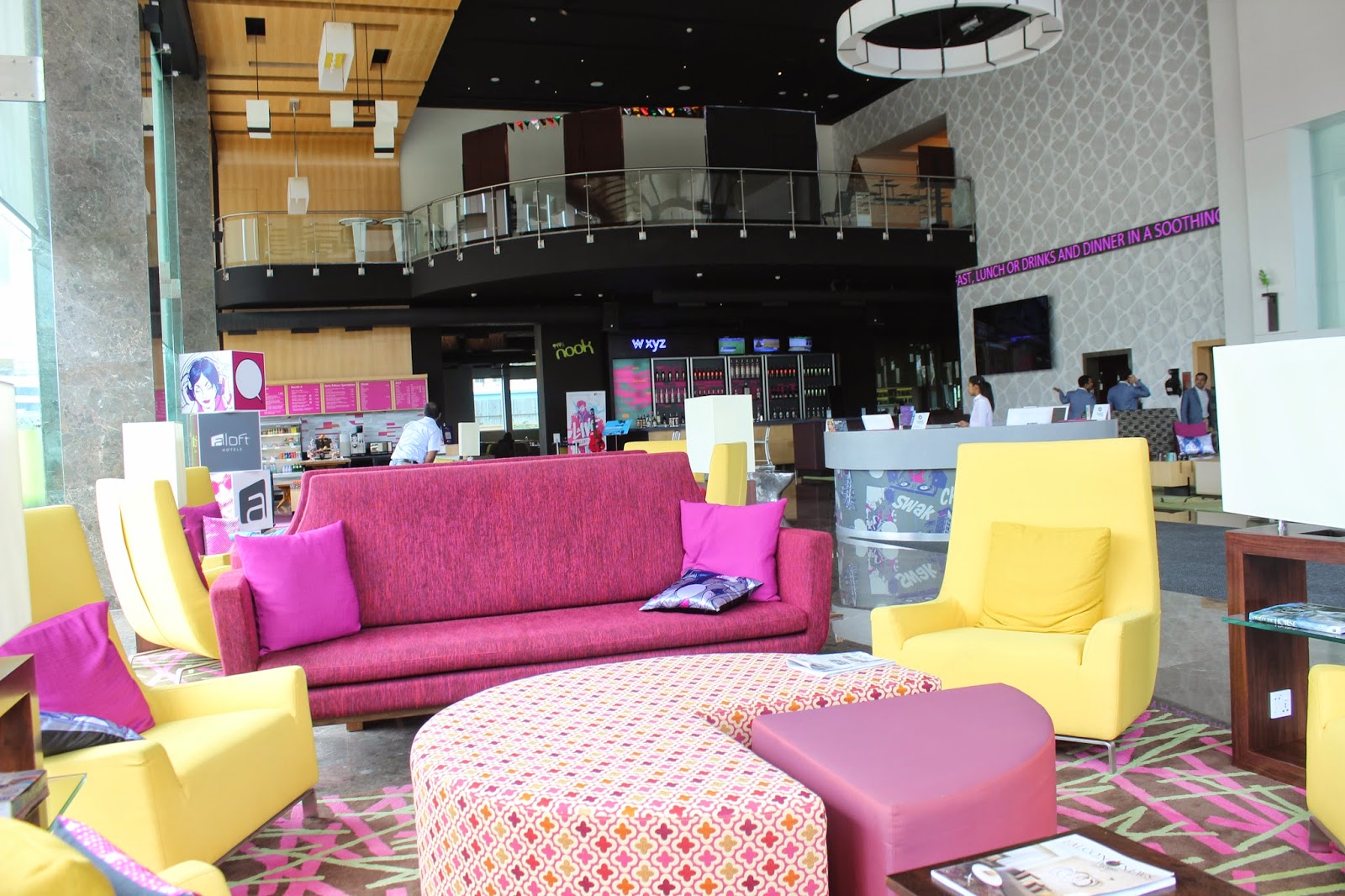 After hugs and kisses with Deeba, Madhuli and Sanjeeta who were already there I knew I was in good company. Then walked in Harini (we had met before in Mumbai), Jayashree and few more. There was non stop chatter, inquiring about  each others families and pets like old friends do, it did not seem like we had just met. It was the beginning of the riotous nights we had at Aranha. Sanjeeta, who had taken on the duty of organizing our stay there paid personal attention to everyone's comfort and we had to tell her to just chill.

The first day at IFBM began with meeting the 40 participants. Known names were put faces to and before we knew Arundati took her position as the mistress of the mic and welcomed the participants and opened the Conference. The general manager of our venue welcomed all the guests and told us to ask for anything we needed and that there was only a YES in his dictionary. Wow! 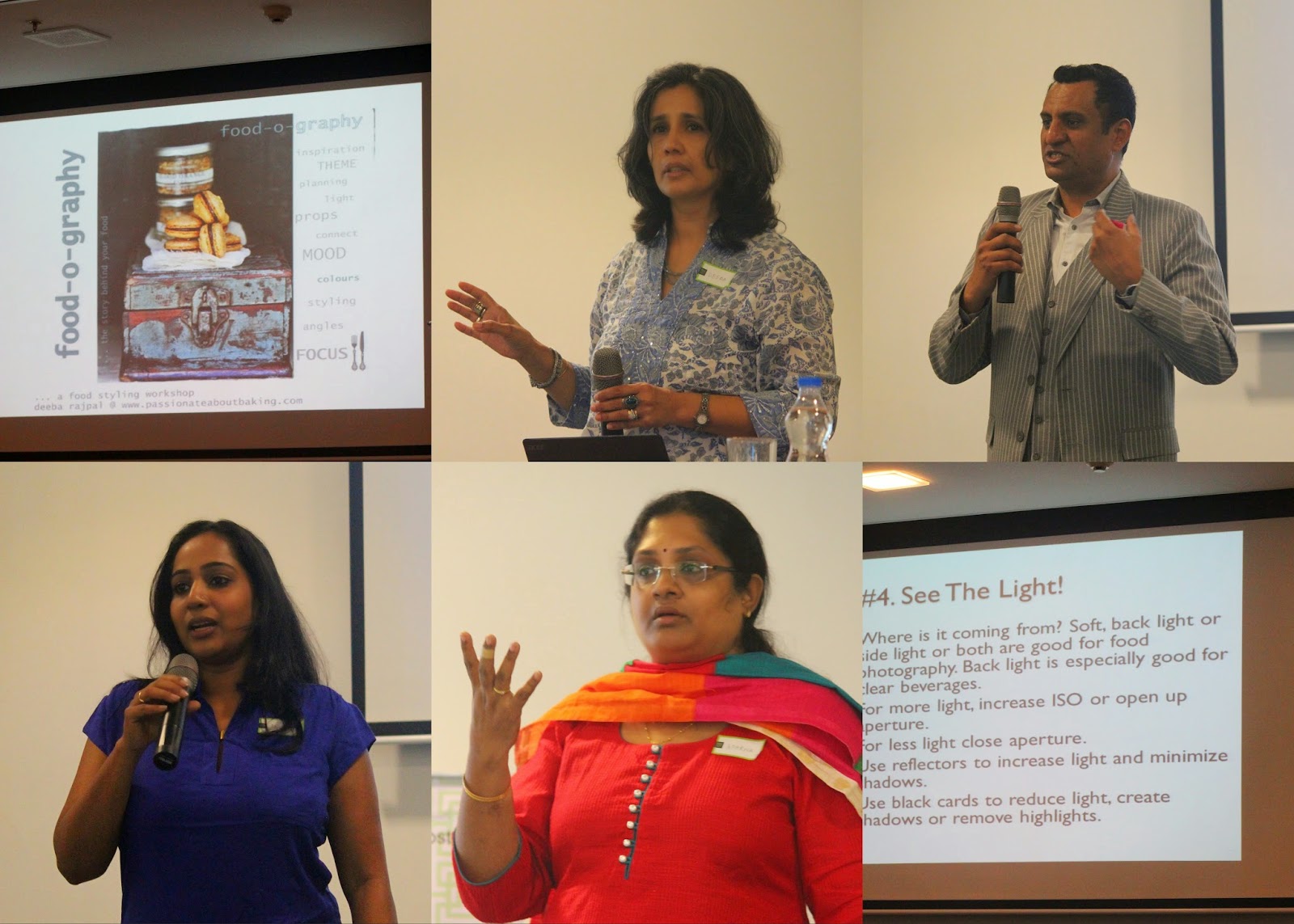 The opening session was by a name that most bloggers are in awe of, Deeba Rajpal, she talked on her forte, Food-O-graphy. Generously tipped us on going seasonal,  looking for beauty in props that don't cost the moon and using the same props to different effect, keeping the palette neat yet artistic, using ingredients along with finished dishes. Some tips to lift up the spirits of the food using some tricks to make them look freshest and if the food demand steaming hot, then what to do. Did I hear the bloggers drool over her collection of props or what when she projected a final shot on the screen!

That set the tone for the next session on food photography by Aparna Balasubramanian. We all love her pictures clean and bright.She acknowledged how food styling and food photography go hand in. It was great to see the different styles in photography as in Deeba's and Aparna's. One moody one bright. We love both. Aparna's session was a fundamental one for a food blogger. The tips to look for light and shadows and how to beat them to our advantage. While on reflectors Harini who is also a wonderful photographer shared that wearing a white T-shirt is a great idea when shooting the pictures. We Indians love our steel and metals and some times its just plain convenient to shoot a food picture in the utensil that you use daily. I have always been worried about them outshining the food in the pictures, you know what I mean. Well its simple said Aparna, just apply toothpaste on the surfaces to rid them of extra shine. Through the session she reminded us to read the manual well, to get to know the camera after all visuals are so important to a food blog.

In walked a red turban, initially I thought he is trying to be funny but he was plain talking down to participants and that was totally uncalled for! Not one blogger liked his attitude. During the demo, we were left thinking if he had ever used some of the KitchenAid's products. One of our fabulous bloggers had to help out with the cordless hand blender. Another moment of revelation was when he said the tomatoes were blanched and later said they were fire roasted and deskinned. From my experience in food I could tell that they were blanched from a distance of a few feet! He made the Kaer Sangri roti which was lovely and flaky but the Tchaman Kut or paneer balls in tomato sauce showed that it was hurriedly put together, I blame it on that time bound demo. However the tomatoes should have been bhunoed, the blanched tomatoes did not work in that gravy. He even dropped the tomatoes on the counter and messed for which he needed the sous chef to clean, I can understand performing in front of 40 India's best food bloggers can be a lot of pressure sometimes. Just Kidding, for Chef Surjan Singh has a Jolly good sense of humor.

Both the recipes of Tchaman Kut and Kaer Sangri Roti are on Burrp, the online partners for IFBM2014. 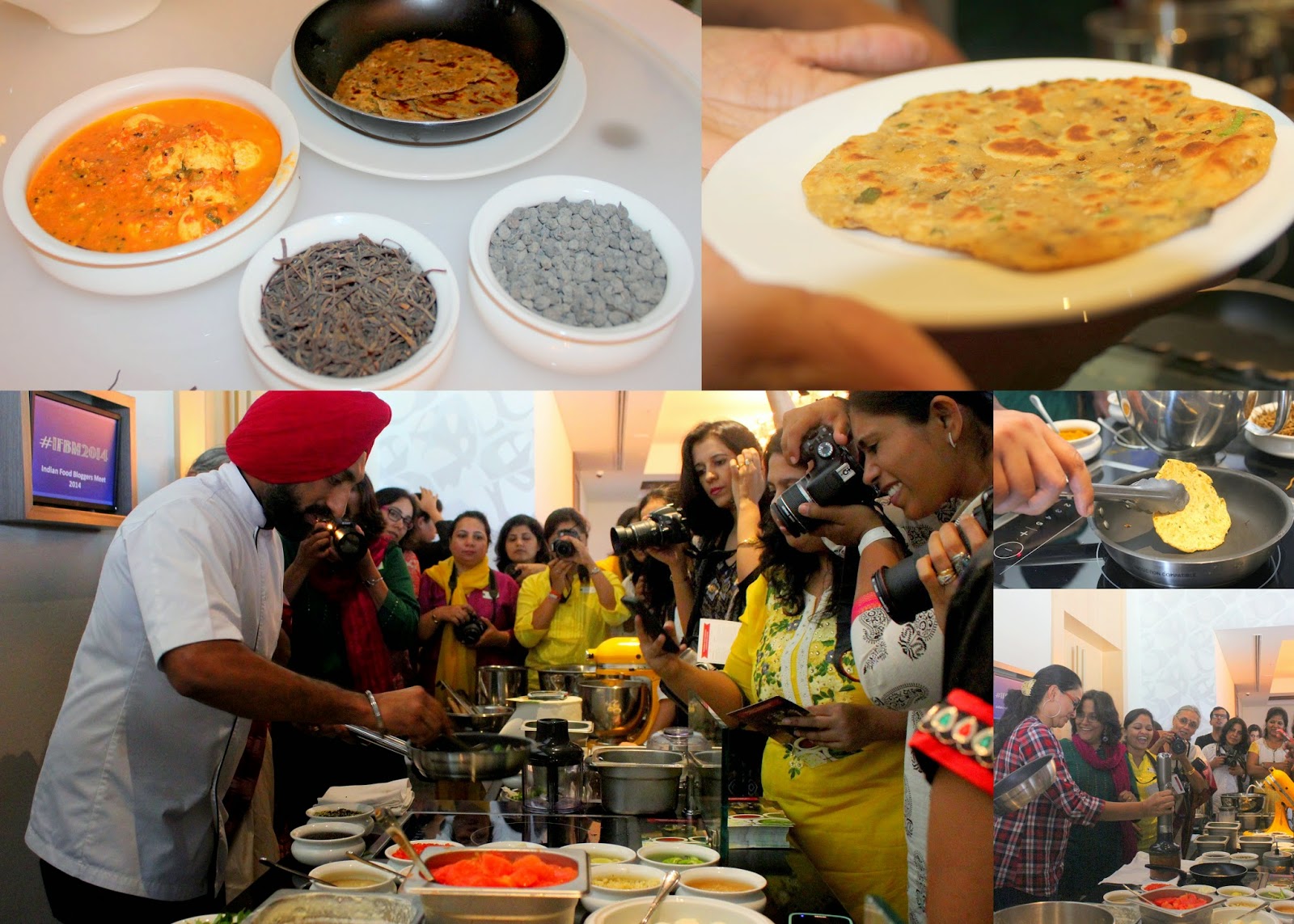 The winners of the pre-Meet KitchenAid contest were awarded after this 'Master class' and they took home the mini choppers. I missed it and was hoping to win waiting for further announcement of the results of  rest of the contests.


During the Master Class there was a rush around the workstation and many could not see what was going on. The hospitality guys wheeled in a platform so the ones behind could jump on to it and get a clear view of the cooking. I would like to mention here a Thank you! for Team Aloft for providing service perceptively.


Post lunch Nandita Iyer shared her user perspective about social media for food bloggers. She is one food blogger who uses social media very effectively to market her blog and beyond. Archana pitched in with her experience too. I am ashamed to say that I do not use social media to my own advantage even though I am a social media specialist (besides many other things) who has done considerable corporate work, now that's changing for sure and I hope you are noticing it, I know you are as we interact more on the AnnaParaBrahma FB page and twitter @AnnaParaBrahma. Keep that going and show me more love please! 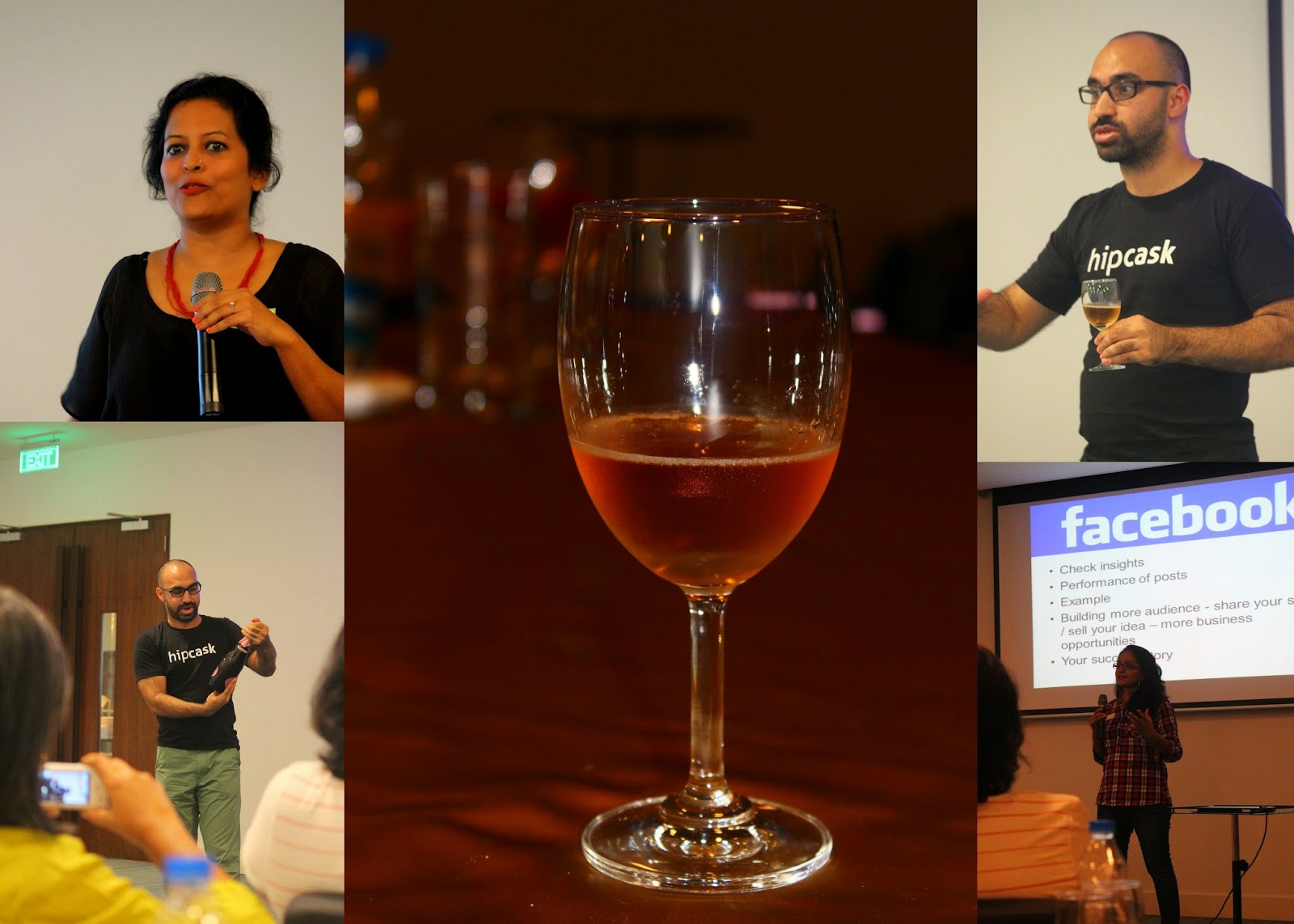 Wine appreciation, one of the things that has fascinated me. I had waited until that moment when I would learn a few things about wine and taste it too. As a food blogger I did not want to say no to this experience. Aneesh Bhasin of Hipcask did a wonderful job on explaining to us about the different wines, about serving them in the right glasses, he demoed the swirl, the gurgle and the happiness of pulling out the stopper and every one had a whopper! We were served a lovely rose wine all the participants agreed. Alas, I found out that I did not have a taste for wine.

After this, the schedule said the launch of the 'Spice Sorcery' by Husna Rahaman. The lady walked in stylishly late. We were educated about a book written by her grandmother and except Deeba  none of us had heard about. (Since Deeba was supposed to be interviewing the author and had read a pdf of the Spice Sorcery even after all our naughtiness at Aranha the previous night.) The author talked how easily she had got the book deal, no how it had fallen into her lap and how wonderful a book it is for us (mere) food bloggers. After the session I went and personally congratulated our Deeba for being a wonderfully prepared interviewer and being totally professional at the given task. Every author out there should know that when you face your audience who just might convert to being your reader, you just cannot take them casually. There was no hard copy nor e-book that was even shown to the bloggers. There was no reading of excerpts that we would have loved to listen to. It's a lost opportunity to make your mark when you have a room full of bloggers from across the country and a few from other continents sitting and listening to you and you don't do anything for them. Team Harper Collins are you listening?

That was the end of the first day. I want to conclude this post with the wonderful experience we had with Aloft Cessna Park, Bangalore. When Mr. Faiz Alam Ansari, GM welcomed us in the morning to the venue on behalf of his team, one would have thought it to be customary. By the end of Day 1 we were already spoilt by the pampering of Team Aloft. They had planned theme based food for the two days. 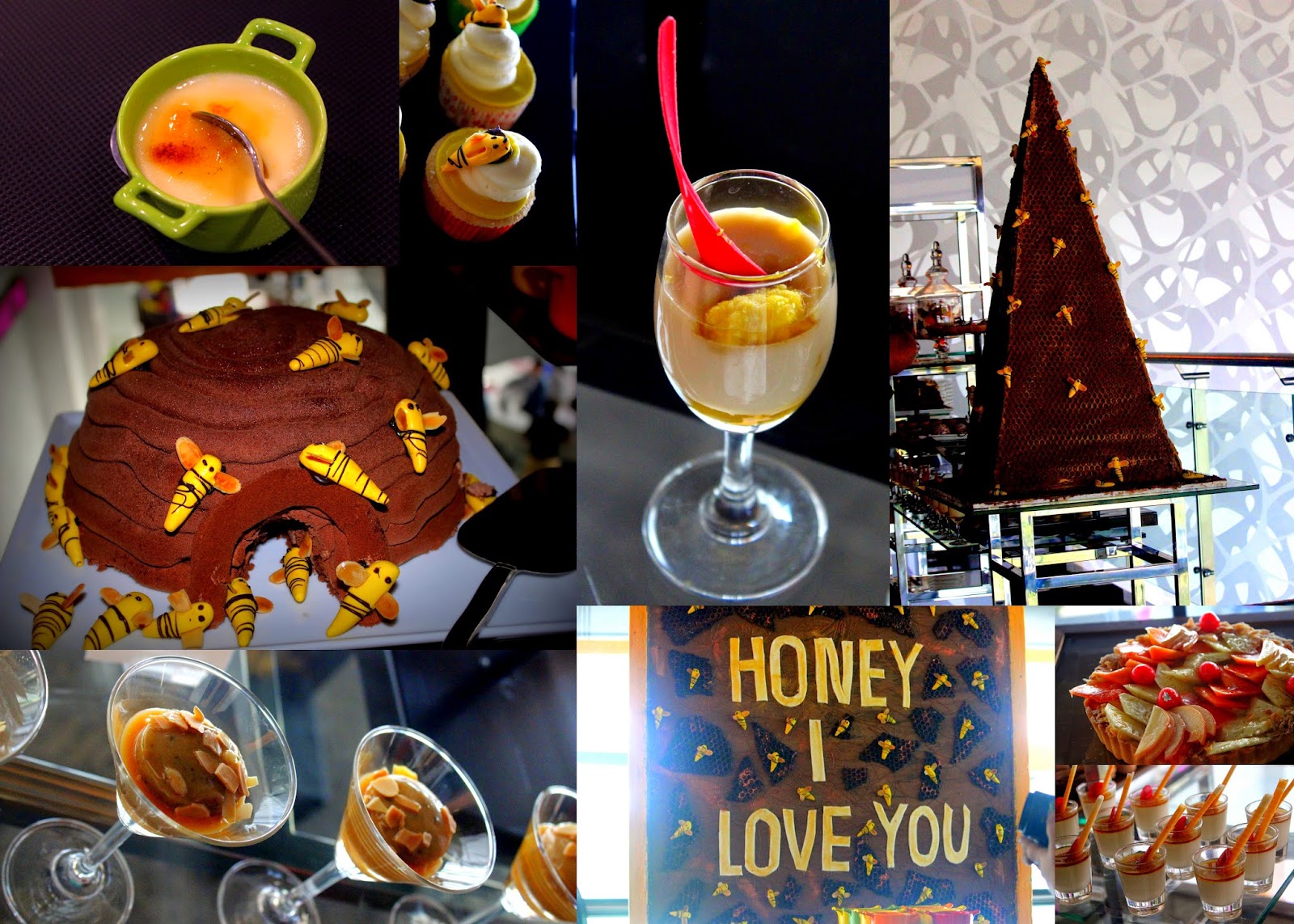 Our first tea was dramatic as the name suggest, "Honey I love you". Tall beehives, cave shaped cake buzzing with bees, petite glasses of desserts, tarts, pastries, cup cakes and little pots of creme brulee all made with honey became a hive for the buzzing blogger bees. My most favorite was a truffle that bursted into the mouth and honey oozed out with a bite.

The lunch was 'Mumbai mela' complete with cuts-outs of Hritik and Shah rukh and Ganapati Bappa too! Bhel basket on a cycle and carts vending chaats, vada pao, ragda pattice and a corner for Gola and Kulfi Falooda. Majority of the bloggers were non Mumbaikars and I could see the glee on their faces. I did selective eating and slurped on my fave Kala khatta gola. 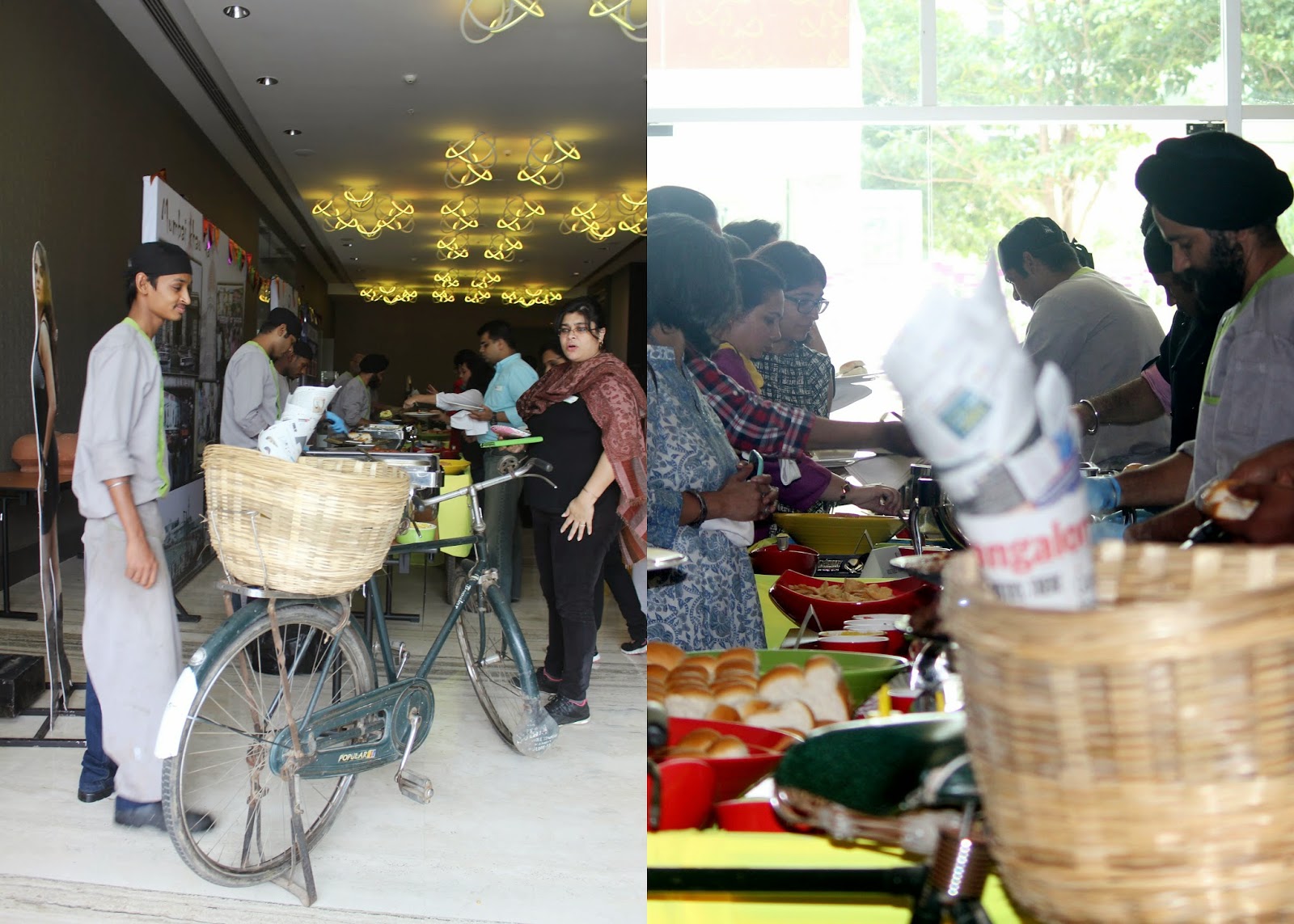 For the evening tea it was "Bengali Adda" There was Ghoti gorom, Alu kabuli, Jhal mudi, Kathi rolls, Tele Bhaja, Momos and Thupka. People were raving about the Thupka. I was too full from the morning and afternoon so I just had a Jhal mudi, the splash of mustard exciting my taste buds. It was end of the day almost and I missed clicking pictures of this spread as I was tired.

Aloft is a fabulous venue the colorful modern decor cheers you up as soon as you spot it from the posh glass walled reception. As you enter and look up you are filled with glee of standing under a Yellow and black Cessna hanging from the ceiling that you see ^ up above in this post. You get into the lift and want to dance on the liquid tiles. Walking past huge colorful bean bags, a pool table and yet another large model of a Cessna on the first floor. We did that many times in two days. Enjoying the hospitality...

Come back again to read about Day 2, won't you?
Posted by Anjali Koli at 4:42 PM 8 comments: Links to this post