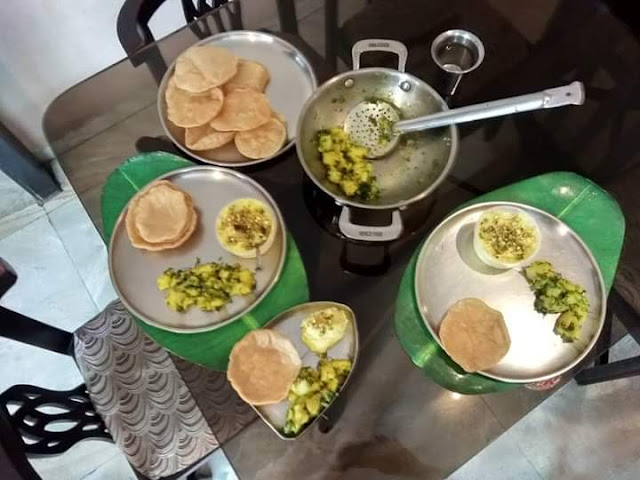 This picture is from our Dasara 2019 lunch


Just had a lunch of Gondavale aamti, bhaat and sukki batata bhaji. Such a satisfying meal when had in this cold weather. The aamti almost scalding sipped slowly from the vati. Stirring intermittently with the finger to mix the settled Dal into the watery top.

Today however Dad and me got nostalgic over the potato bhaaji. Actually I got nostalgic because this was part of my vacations in Thal as a child. The sukki batata bhaji was eaten as a snack on its own. You heard me right, those were simpler times. A wee bit of chili but a very fragrant mustard phodni that made you salivate. Tambat, was a kasar/ blacksmith but he had a grocery shop. When we went on an errand the kadhai of bhaji was very tempting. He would keep a bhendi cha paan in a paper sheet and wrap the pudi/ packet. We would run back home deliver the errand and rush back to Mongoorichi Vadi else our animal house and nibble at the super tasty sukki batata bhaji.

It also brought back memories of how our village has changed after the arrival of RCF factory. Once upon a time the economy spun around fishing. The daily market of vegetables sprung up twice a day in the Dukaan aali or shopping lane. Basically existing shops allowed the vegetable sellers to sit on their front porches. They got paid in kind for it. Every vegetable vendor had a designated place and all this was informal. Sometimes the place for sitting got handed down from Mother to daughter and father to son.

The vegetable sellers had farms and orchards to grow and sell. That was the source of honest income. Sometimes they bartered vegetables for fish.

The fish market an open space was closer to my ancestoral home. It was smaller than the vegetable market. Thal bazaar was famous in Alibag region for fresh fish. Sometimes even sellers from near by villages came there.

Now all Malis (farmers and gardeners), Grocers and shop owners have shut down their businesses. The Dukaan aali is lack lustre with few shops left. They are dusty and barely do any business. The fishing businesses have sized down. All men have been working as labour, technicians, clerks in the RCF factory. Fortunately in well paying jobs because of the occupational hazards they risk.

The village has become a little bit modern but less vibrant. The economy that dominates now is 'Service' in RCF.

There has been some good though all the children of the RCF employees have got good education and opportunities. Yet I miss that traditional solid economy of Thal and it's culture. Majority of farms were given to RCF project so very few actual farmers left in the village. Everyone buys their requirements from Alibag and supermarkets. That self sufficient village is a thing of the past.

I miss that culture and life in Thal.

Coming back to sukki batata bhaaji the recipe is on my YouTube channel 'Talkative Anjali'.

Try it out and let me know how it turns out.

Posted by Anjali Koli at 2:27 PM No comments: Links to this post