Will Renovation Give Happiness? 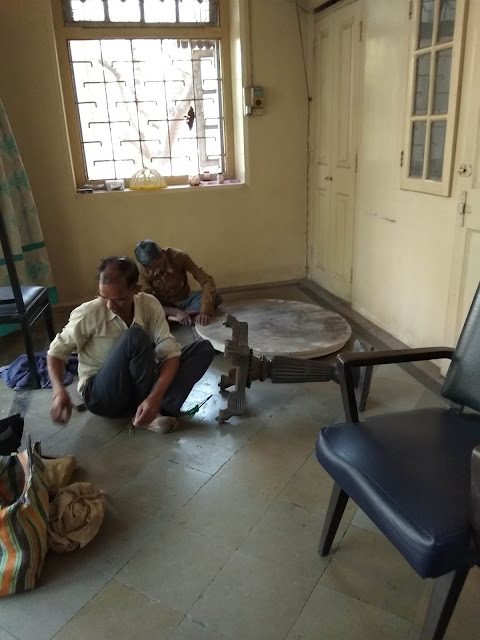 The scene at home today.

Jagdish, our carpenter is here to help me refurbish some furniture. He was working in our home when Arvi fell unconcious on that fateful day and had helped me in that moment. I am grateful to him. So I thought I will give him more work now.

We, Arvi and I had planned to renovate the home. Arvi had health issues that started when he was in college right till the end so he had no interest in home improvement. His sister too later wasn't keeping well so this home was in a state of neglect. He would ask me, "Will Renovation Give Happiness?"

Those who know me and my Dad know that we love a spick and span home. So when I met Arvi I was already helping him clean up the home, I used to joke that I am doing it so he has a liveable space and not to consider it as my indication to marry. I was not sure about marriage but I was very sure I would not like to live in that state of the house. It was at the time Arvi promised me that We will renovate the house to make it our home. He visited my Dad's home and decided that we will have the same green colour to make me feel comfortable in our bedroom. The only project Arvi helmed was of painting the home before we got married.

If at that time Arvi hadn't been honest I would have not known things that mattered to be married. It mattered big time for me to have a clean home. However I was confident about making it a good home with that I jumped into marriage because I knew I had a gem in Arvi.

However we struggled so much on health front after marriage too that we did not have energy for a complete renovation. In spurts I got the flooring changed in some parts of the house. Actually at first I gave away a lot of furniture and clothes to make way for the new. I got a wardrobe built because though there were 10 cupboards there was no space for my belongings.

Slowly the helpers started admiring the cleanliness at home. Even the delivery boys started complimenting.

However I don't know what is in the future of this house, I am constrained and it's not for the lack of finances.

This house has seen family loss like none other. However I soldier on as the last survivor.

Time will tell my story.
Posted by Anjali Koli at 11:41 AM 2 comments:

Email ThisBlogThis!Share to TwitterShare to FacebookShare to Pinterest
Labels: Not a recipe 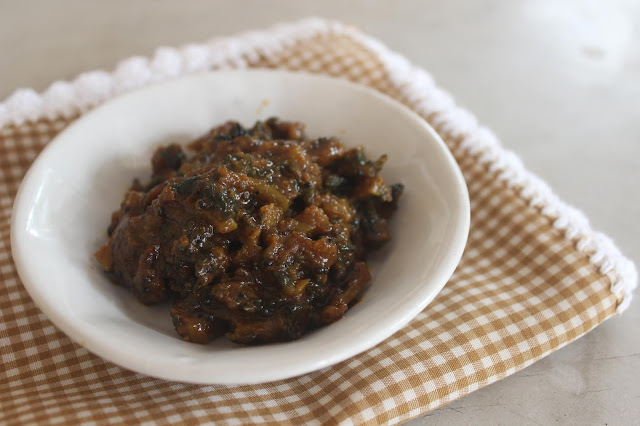 If you are North Indian after reading the title you are in splits, I can see that. To add to that the color isn't working in its favor either. Oh lets get beyond that poop joke and look at the huge lesson this dish stands for.

Life's experiences are bitter just like the bitter gourd but if you know how to live well then you turn those bitter experiences around to mellow and make them palatable. This Hagalakayi gojju is from the Karnataka repertoire. It requires a Gojjina pudi or a special masala that makes it nutty and fragrant. On my YouTube channel TALKATIVE ANJALI I have posted the video for Gojjina pudi go over to watch.

Heat oil in a small pot. Splutter the mustard seeds and curry leaves. Add the cured bitter gourd to the seasoned oil. Stir and let it cook for 2-3 mins. Add water to cover the bitter gourd put a lid and cook till soft. Then add the gojjina pudi. Follow in with tamarind extract and jaggery. Add salt as per taste. Let it come to a rolling boil and all flavors meld together. Let it thicken a bit and then put off the heat.

This hagalakayi gojju or relish is a beautiful palate changer in a thali. You can enjoy it with rotis, puris, dosas, etc as well as rice.

You can create different varieties of gojju with the same recipe. The most popular one is the pineapple gojju, check it out on my YouTube. 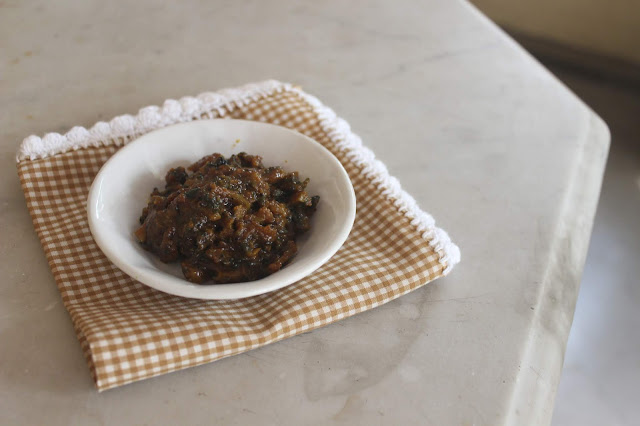 Posted by Anjali Koli at 3:30 PM No comments: