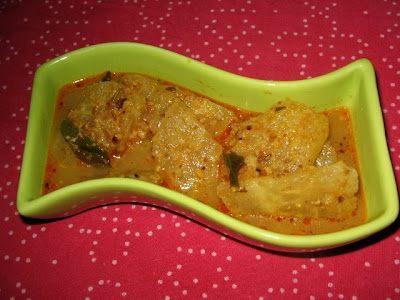 Sometime ago I saw the Tinda in peanut curry on Vinaya's Mom's shared pictures. I was curious what it was? That inspired me to try this combo of Navalkol and Peanuts.

It is a simple to make curry that goes well with chapati and roti. I would not recommend it with rice Or just may be you might like it.

Heat oil and give the tadka of mustard seeds and cumin seeds. Add the sliced Navalkol and fry a bit. Add in the peanut powder and top up with water. Add the spice powders and give it a stir.

Boil till Navalkol is cooked and soft. It holds itself well in the curry. After it is cooked completely add kokum extract, salt and sugar and bring to a rolling boil. Put off the heat and serve after 10 mins, this allows the blending of the flavours.

You can make this in a Pressure cooker too to save time.
Posted by Anjali Koli at 7:09 AM 2 comments:

This post is to congratulate Dr. Narendra Jadhav (Educationist) for receiving the Rajiv Gandhi award this year.

Dr. Narendra Jadhav is someone I have been following on TV. The first time I heard him was in a discussion on economy in India along with a panel of experts way back in the late 80's. I admired the way he spoke. In one interview he was talking about this father and the upcoming release of the book "Aamcha Baap and Amhi". This story touches the hearts of not just the dalits but all underpriviledge people. It is the story of a winner against all odds.

Most of our parents who came from small towns to the big city Mumbai and achieved success will have a similar story. Dr. Narendra Jadhav's story relates how education changed the life of their family and he is admired not just for achiveing success but being the best.

On Friday my schoolmate Shalaka smsed me to watch Rajiv Gandhi awards on the weekend as her uncle was one of the winners. Only then it struck me that I never knew they were related.

This post is also for her, Dr. Narendra's elder brother and Shalaka's father, Mr. J D Jadhav was no less an achiever. He went on to be the Municipal Commissioner of Mumbai in 1995 before his retirement.

This family has not forgotten their roots. They have achieved very well. Even Shalaka's generation has done very well for themselves. It always comes up in our discussions, a motto we learnt from our parents and school and continue to live by "It does not matter who your father is".

It did not matter that Shalaka's grandfather was a worker in Bombay Port Trust. It did not matter that my grandfather was a fisherman. Our fathers achieved irrespective of their backgrounds. In turn they made sure their own children were given a perfectly normal middle class upbringing outside the shadows of their power while giving us a protected life different from their own.

My Sashtanga Namaskar to all those people who rise high irrespective of their backgrounds!

Also here is an interview done by CISCO.

Email ThisBlogThis!Share to TwitterShare to FacebookShare to Pinterest
Labels: Goshti 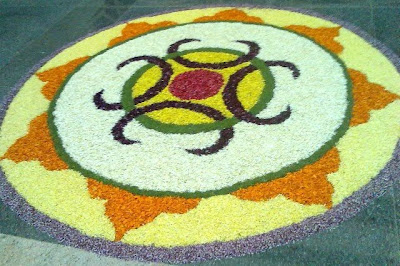 May this Onam bring a change in life that you desire so much! 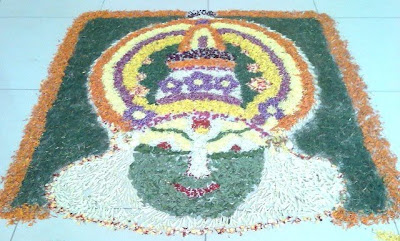