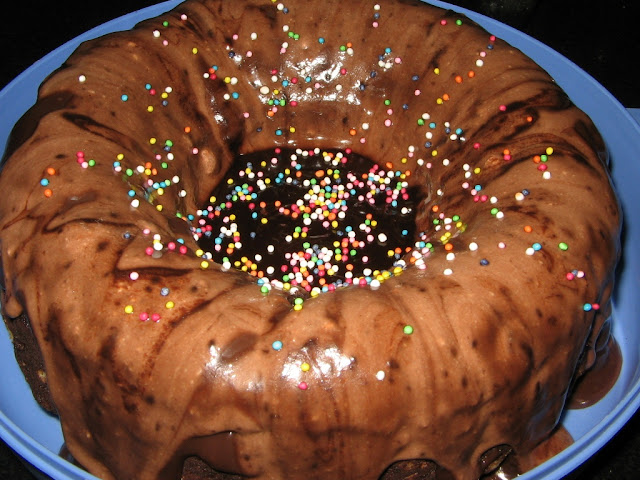 It has been such an eventful last week for reasons more than one...

One was Friday, my nephew's birthday. He threw a googly at me, specifying that he wanted a chocolate bundt cake. I was wondering how to decorate to make it a celebration cake and good blogger and facebook friends came to my rescue.

Bundt cakes limit you in the frosting ideas, you can only pour some thing over it. It does look pretty but that's traditional. I was spoilt for choices, toffee sauce/ fresh cream/ dulce de leche or chocolate ganache? The birthday boy loves chocolate like all kids his age so I thought it would be a great idea to make a Chocolate Volcano cake. With marbled effect of Chocolate ganache lava overflowing and in the center. A sprinkling of confetti for the fire spewing volcano. Now with that idea in the head I started out to execute it.

I made the chocolate cake using my Choco-Vanilla marble cake recipe which will follow. This post is about the decoration. The cake without the jazz on its own is a beautiful rich tea cake and deserves its own moment of limelight. So come again for the recipe of the cake but for now this is how the decoration was done.

First turn out the bundt cake into a serving dish, upside down.

Bring the fresh cream to a boil.

Keep three small bowls ready for the 3 types of ganache.

Milk chocolate ganache: Melt milk chocolate by zapping it in the microwave for 30 secs. Pour 50ml of the hot Amul fresh cream over the chocolate.

Pour the milk chocolate ganache over the bundt cake. This will be the dark layer.

Marbled chocolate ganache: In another bowl take the dark chocolate and pour 40 ml of the hot fresh cream over 50gms dark chocolate. Mix to get a marble effect in two colors of light and dark ganache.

Pour the marbled ganache over the milk chocolate ganache we poured over the cake to form the second layer of lava. 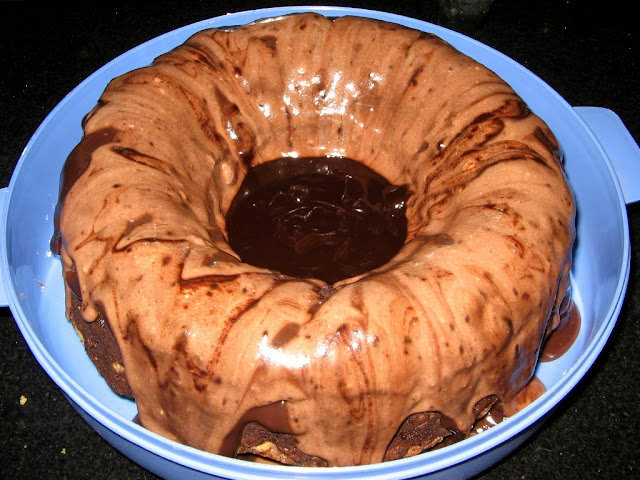 It looks pretty without the confetti too...a version for the adults.

On cutting a slice it revealed the embedded rocks of walnuts and the slice coated in chocolate ganache lava and one could pick up the dark lava in the center and spread it on the slice. A lesson in geography too! LOL.

I don't have a picture of the slice as I forgot to load batteries in my camera. I was in a hurry to go as this decoration was done after I reached home from work and then rushed to the BD boy's home. He was waiting for me to reach there and told his Mom to hold on the aukshan (aarti) till I went, ain't that sweet! 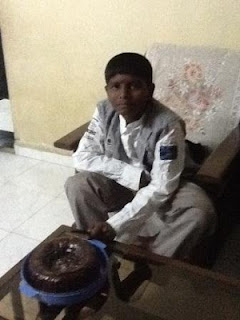 In the end sprinkle the confetti over the bundt cake ring and a denser sprinkle in the center to give the effect of a fire spewing Chocolate Volcano!

This is Nirbhay and he turned 12 on Friday and was so excited about it  that he wanted to go to school by BEST bus instead of being dropped by his Mom like everyday, just so that he could buy himself a full ticket! 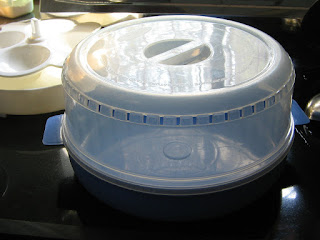 Tip:
I used a microwave steamer as a cake carrier. So the bundt cake was turned out in the base of the steamer. It proved to be better than the cake box. The Birthday boy lives about 45 mins drive from my place and the cake traveled the distance well. I would suggest sprinkle the confetti just before cutting the cake to avoid it melting in the ganache.