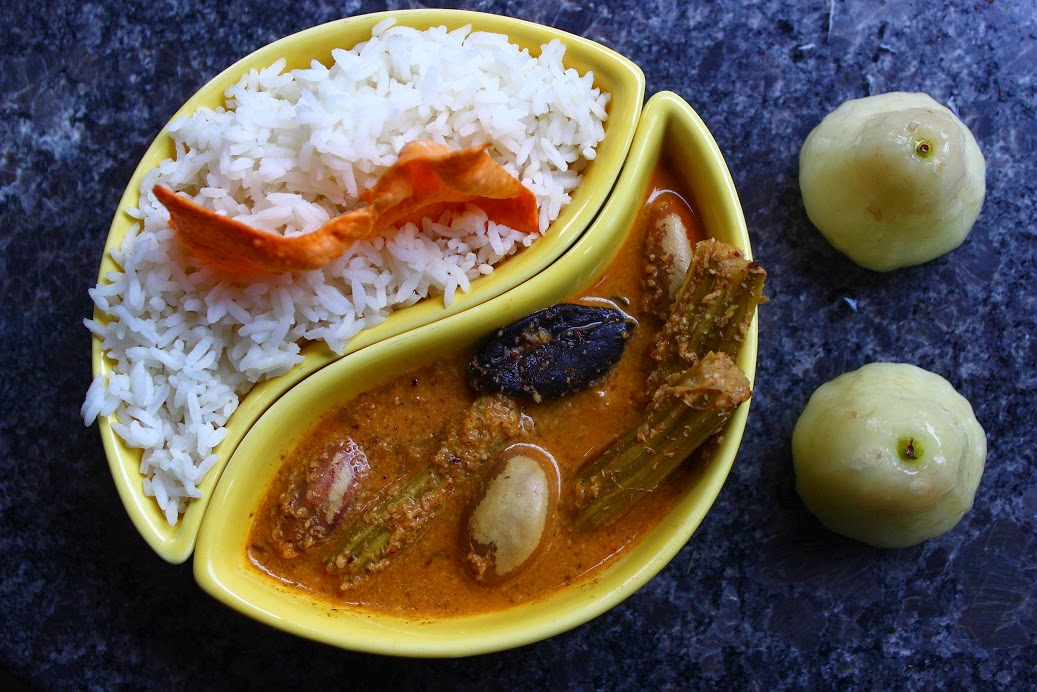 The summers are redolent of ripe Jackfruit as much as of the Hapoos Mango. For me the Jackfruit memories are of Tata Colony where I spent my years between the age of 16 to 28 yrs, unlike memories of vacations in the village of Thal. This colony is a dense enclave of trees of every kind and so the jackfruit too was abundant. Neighbors shared their jackfruit harvest with each other and so right from April to August we had a continuous supply of 'garey' or the fleshy yellow arils. If the Jackfruit has firm fleshed arils it is called 'Kappa phanas' and the soft creamy fleshed one is called 'Barka phanas'. It is hilarious that when we had cold as kids the snot if soft and yellow was also termed in the same way!
Sorry to have digressed but then what are memories without some wanderings. In Thal my memory of jackfruit is watching the huge spiky fruit being cut my Yeshi Malin or some other seller and we buying a slice as long as we vacationed in the village. The slice would be held at eye level to count the no. of arils we would get for the money and also mentally check what the distribution would be among cousins. We never bought completely separated aril. The fun in eating from the slice peeling out the rags and popping out the seed from the sac is a pastime we enjoyed on those uncomplicated days.

Yet Jackfruit memories of Tata colony are stronger. Those were the days when whole jackfruits were brought in by our opposite neighbors the Deshmukhs. The aunty would say cut and clean and share a few with us keep the rest for your family. We would gladly oblige. As evening fell and Mothe baba returned from work, we would tell him he had a duty to do. One of us would then spread a newspaper in the backyard. The cousins rallied around getting the soop (bamboo weaner) in which the garey would be placed later. Yet another one would go into the kitchen and comeback with the oil container and the Kaathi ( sickle ). After everything was set Mothe baba would take his seat on the concrete floor in the backyard much like a butcher. He would carefully oil the Kaathi and his hands. This to avoid the latex from sticking to his hands and the equipment. Then he would give horizontal cuts on the spiny jackfruit cover turning it around to complete circles, each circle was cut off carefully making sure we had whole arils. The rounds were then cut into halves and the yellow fleshy arils would be separated and placed in the soop. Only after all the phanas was cleaned some would be sent back to the Deshmukhs and then our family would be called to eat the garey. A warning followed, "Enjoy in moderation and don't drink water after eating garey."

The seeds or Athlya as they are called in Marathi, would be collected in a pressure cooker insert. Washed thoroughly and then pressure cooked along with salt; to be eaten as a snack or to prepare a curry, the recipe of which I am sharing here today.

The boiled seeds have a hard cover which is peeled off and the starchy seed inside is eaten. Many peel the skin before adding to the curry but I like to keep it on so that the seed does not crumble into the curry and I personally feel peeling the skin while eating allows you to stop and savor the seed a little longer than chomping on it and swallow it without a thought of where it came from. 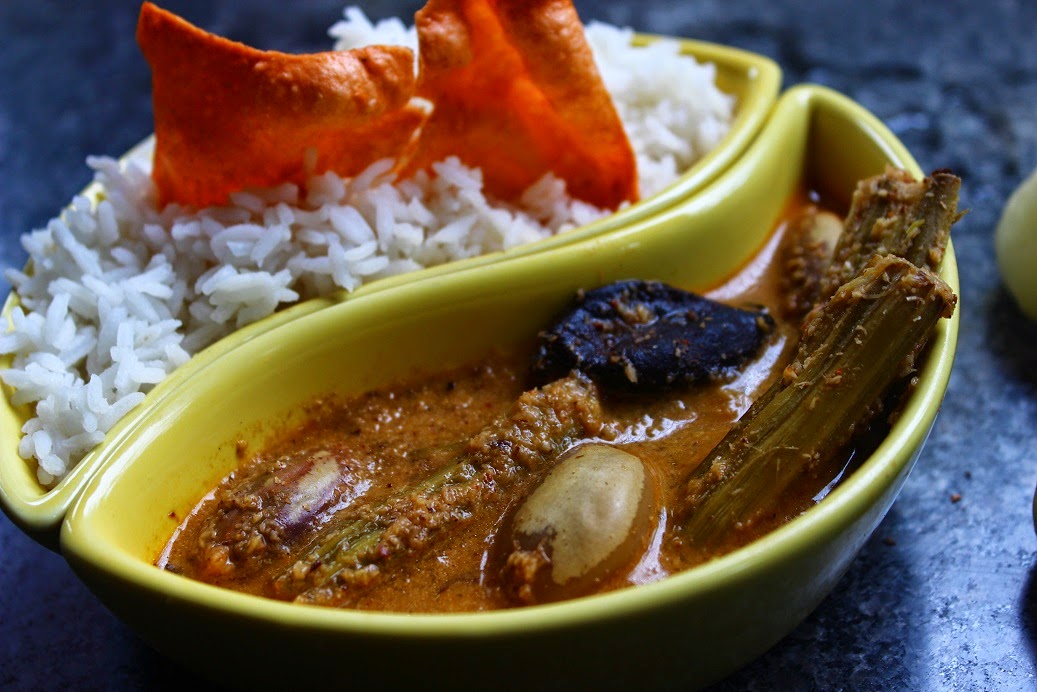 Wash the jackfruit seeds and boil them in a pressure cooker with little water in the insert to allow proper cooking, these seeds are quite tough and must be cooked well to avoid bloating after eating. In a separate insert keep the drumstick pieces to steam. Keep aside.

Score the onion like a hot cross bun. Roast it on fire till outside is black. Let it cool.

Toast the coconut a bit to make it nutty.

In a grinder make a masala paste with the roasted onion after discarding the outer charred skin, coconut, Malvani Masala, garlic, ginger, cilantro and green chili. Save it.

In a vessel heat oil. Smoke the red chili till pungent in the hot oil. Add the ground paste of masala and fry a bit in the oil. Add the boiled seeds and steamed drumsticks into the masala. Top up with water. Keep the consistency of the curry as you like. We like it not too thick and not too thin.

Add the kokum and salt boil another 5 mins. Let the curry cool a bit before serving.

This curry blooms in flavour as it gets older like most onion-coconut masala curries but this is summer time so don't leave it at room temperature, keep it in the fridge.

I have these two bowls which fit into each other, they also resemble Jackfruit arils so I chose them to serve this curry along with Wada kolam rice and Poha mirgund microwaved and tucked in. This curry is lovely with rice and would go well with chapati, bhakari, puri. Malvani Vade would be really fantastic to mop up this curry. Did you know you could buy Malvani Vade peeth on my Eshop? 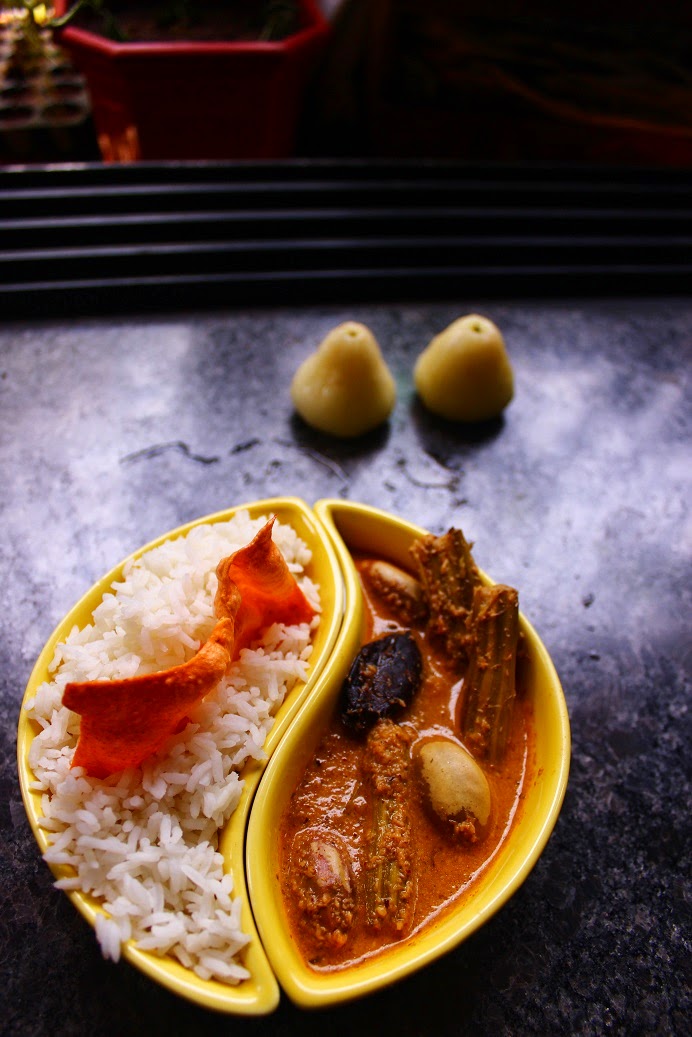 How was the taste?

This  is a wonderfully fragrant curry and peeling the seeds as you lick off the masala gravy on it gives you time to relish the curry even more. Sucking on the drumstick soaked in the juices is something you will enjoy thoroughly. 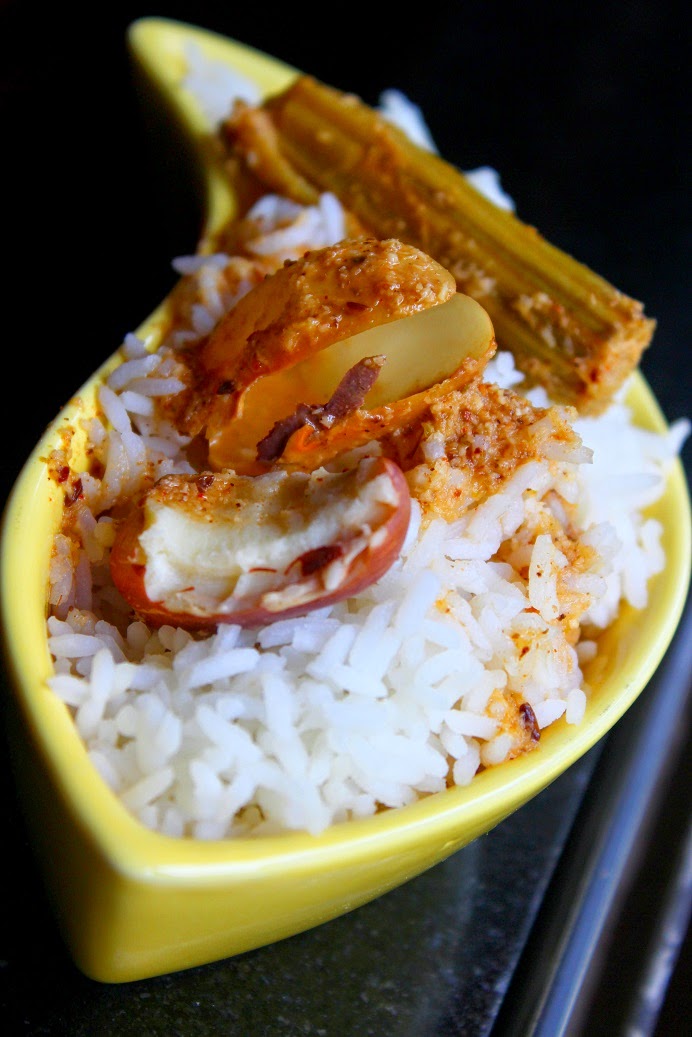