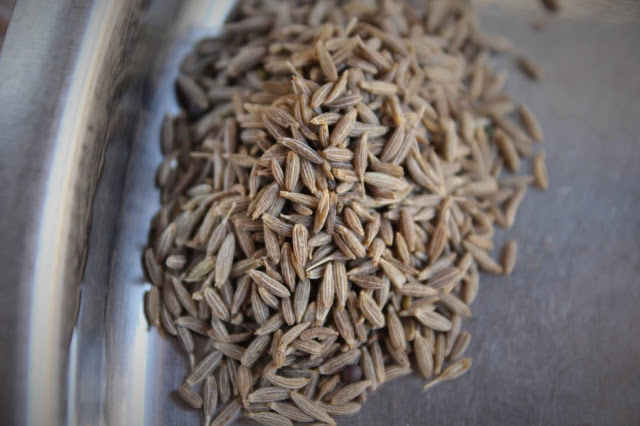 Spice no. 3
Jeera was once upon a time a prized spice. You guessed it right as it wasn't grown widely in Bharat. It was grown mainly in Egypt and the Middle East.
It belongs to the Parsley family and the leaves look like Shepu bhaaji. The Jeera or Cumin we know has a strong warming flavour. If not used carefully it overpowers all other flavours in a dish. It is one of those spices that get a special place because of this bossy flavour in dishes dedicated to showcase it. Like the Jeera rice, Jal Jeera, Jeera aloo etc. Interestingly Jeera is not predominantly native and was very expensive in the past centuries as it was traded in India by the Arabs. Yet jeera was used in fasting recipes. Fasting recipes as you know uses foods n spices which are not eaten everyday. This is to be able to get a shot of new nutrients and a break from the usual grains. Hence began the use of jeera in the fasting recipes. It was a show of luxury too. The fasting recipes did not allow use of mustard seeds which were used everyday and that gap was happily filled by cumin. Plus a little of it made the dish fragrant and warm.
Believe it or not cumin was used as a preservative not just for food but also dead bodies in Egypt. It was one of the important spices used in the mummification process. This spice later travelled to different continents and finds big use in Latin America. The Orient uses cumin in a lot of its dishes and medicines too. India and China grow 70% of world's cumin and use 90% of it.
In India cumin finds big use in home remedies for the gut. There is a whole range of jal jeera, Kashyam and rasam where Jeera in the hero. It has been incorporated into the tadka and has become common place. Jeera is one of the 5 spices in panch phodon too.
How can we forget our bhuna jeera that is sprinkled on chaats. However that is a traditional thing to do in the Middle East, it is placed on the table just like salt and pepper for all to help themselves to.
Posted by Anjali Koli at 2:16 PM

Email ThisBlogThis!Share to TwitterShare to FacebookShare to Pinterest
Labels: MasalaTrail