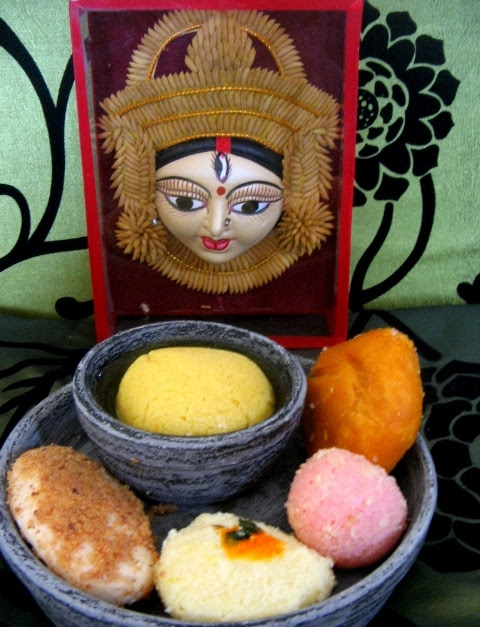 Pancha bhog for my Durga Mata
(Authentic Bengali, the goddess face, the dish and bowl are souvenirs from Kaalighat and the sweets from K.C. Das)
All of last week I was planning to visit one of the Durga Puja Pandals in Blr. Sayantani's post was a motivation for me to go to Kormangala for a dekho.
Finally I did make it today. It was a beautiful puja with the Mahishasur Mardini in the center. There were 4 other idols flanking on the sides of which I could recognize only Ganpati. We reached there sometime after noon and a pushpanjali was being offered in the midst of chanting of a stotra. The mantra/ stotra were being sung to the tune of Rabindra sangeet. It was a very soothing experience, a huge crowd bowing their heads in front of the towering idols on the stage was a moment of connection to the divine. In spite of the Bengali people being away from their home they were here to pay their respects. Most people looked on mesmerized, I was trying to read what different people where thinking when they were praying. One thing I was observing whatever the child in them was demanding for the Shakti Maa the expression on their face was of submissions.
As we stepped out of the hall we saw there were many shops set up selling food right from aloor dum and luchi to Kathi rolls, you had Sarathi, Bangaliyana to Nizam there. I am a wimp when it comes to eating out at mass production area like these stalls. So I almost went to buy something and came back. There was a bhog ticket available and people were lined up but we decided not to go. Instead we lunched at Mast Kalandar which is located further down on the 80 ft road. Our order consisted of Dasara Combo of Alur dum, ajwain puri, matar puri, dal tadka, mutter paneer kaju makhana, salad, sweet curd, Rajbhog and Mutter Paneer pulao and an extra Aloo do pyaza paratha.
While coming back home we craved for more Bengali sweets so we picked up 5 varieties for the two of us.   On returning home I promptly offered it to the Durga Mata I have at home and settled done to feast on them. That is the panchabhog you see here. Instead of a sugar high I was completely doped and needed an immediate snooze. 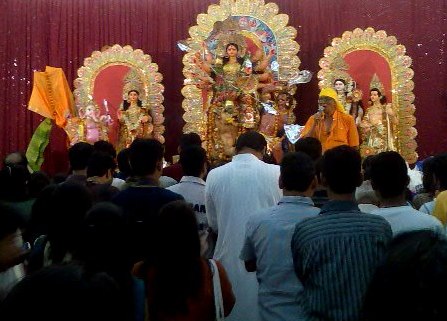 The Kormangala Bengali Puja opposite Prasanna Ganesha temple on 80 ft road.
Before going to Kormangala puja I went to our Brahmachaitanya temple as it is Ayudh Puja here today. While talking to one of our friends there he asked me, "Why are you going to a Bengali Puja?" I told him because I've never experienced it. 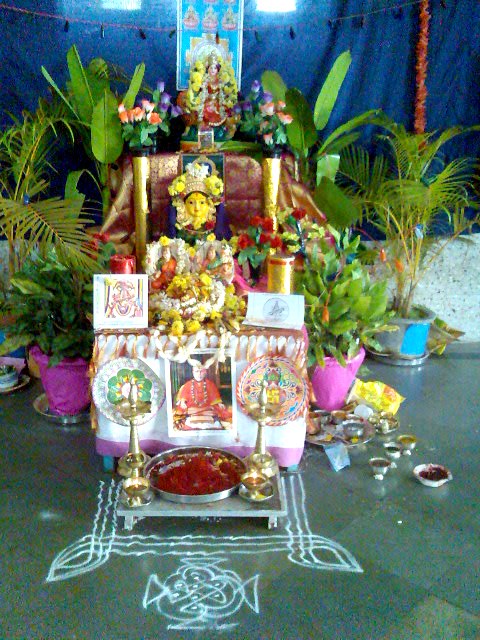 Navaratri puja set up at Shree Brahmachaitanya Mandir in all the colors of the South Indian tradition. 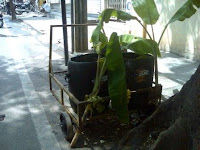 Even the city's helpers do a ayudh puja!
When I came back home I was tracing back memories of the Navratri celebrations in Fort. This is the period when you have the mid term exams coming up just before Diwali vacation so I have never attended the Ghatasthapana in Thal. The worshiping of the power of a women in the divine form is as diverse  and colorful as the Indian people. Coming to think of it. I always associate this celebration of Shakti pooja in my mind with Gujarati traditions. In that sense a part of me is Gujarati.
Dad and me got talking about the celebration in Maruti Lane, Fort, Mumbai where a huge shamiyana was put in front of our building and right from Ghatasthapana to Kojagiri it stayed there. It was always Navratri celebration first and culminated with a Homa-Havan on Kojagiri day.
It was nights of sneaking down to play garba and dandiya. When we would invite troupes for fancy dress dandiya dancers. It was hilarious to see Alexander, Krishna, Mirabai and Africans playing dandiya together.  It meant nights of talent shows for all age groups. Of being the first to check out the flower decoration done by Neeru aunty for Mataji ni Wadi. Most evenings one of our Gujarati neighbors would invite Mom for garba and haldi kumkum in their homes, I would like many other girls tag along with Mom. We would come back with little glass bowls or katoris filled with prasad, a gift from the host.
The announcement of the aarti "Amba Ma ni aarti maate baddha niche aavjo" made us dump the books and race down  while shouting back telling parents we will come back to finish the homework. Along the Aarti Jai Om Jai Om Maa Jagadambe  we sang. What was amazing is the whole crowd touched the person in front of her/ him like  in a game of dominoes till the person who held the aarti thali. It was a human contact chain or rather a rosette. Mohanthal was always the prasad for everyone at the end of it. Most times when we were not allowed to go  down when Amba Maa was moved back into the temple on the last day at 3 am in the morning with chanting of Jai Ambe Jai Bhavani! Jai Ambe Jai Bhavani!! Jai Ambe Jai Bhavani,!!! Jai Ambe Jai Bhavani!!!! Jai Ambe Jai Bhavani!!!!!  I would wake up to chant from my third floor window sitting up in bed. It was an amazing time, I still recollect very vividly.
Listen to this fabulous Garba geet there are many new cover versions of it but this is closest to the traditional one I have heard as a kid growing up in the heart of Mumbai. With that I wish Shubha Dasara!! to all my readers and their families.
Watch the guy swinging the cymbals
Posted by Anjali Koli at 9:53 PM