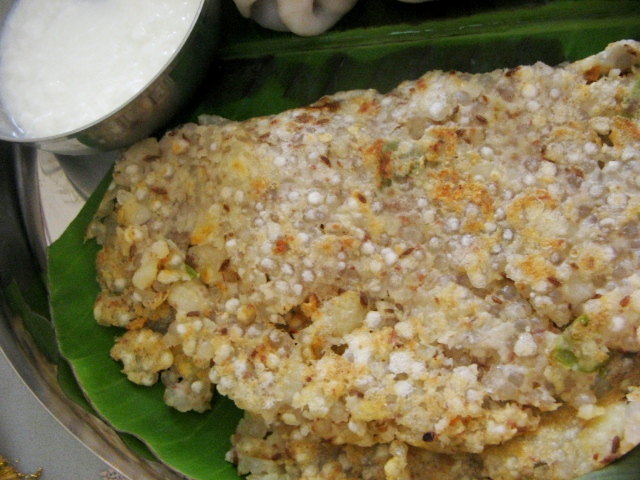 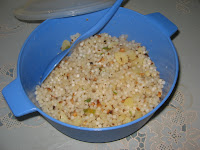 Since the 31st was a holiday I stayed up reading on the net late into the night, waking up at 10.30 am. It is a feat for me because I am early riser. As soon as I woke up I noticed on the Kalanirnay panchang that it was Hartalika on the day. I thought any ways half the day I have slept through so the rest of the day I might as well fast. I had soaked sabudana/ sago the previous night thinking that it is Chaturthi on the 31st, I completely forgot that it was Eid on the day and so we had holiday. Thus I decided to fast for Hartalika. I made Microwave Sabudana Khichadi as shown by Nupur. It turned out great and was done in just 2 teaspoons of oil and have concluded that this is the only way sabudana khichadi should be made! No worries about it becoming a gooey inedible mess.

Later on the 1st I ran out of sabudana and I was supposed to fast for Ganesh Chaturthi. Early in the morning as we were preparing for the pooja, I requested Dad to go down to Reliance fresh and get sabudana as soon as they open up. Else we would have to eat just Potato bhaaji for the half day fast. My Dad at the stroke of 8 ran down and got the sabudana. I immediately soaked it in luke warm water knowing that I could let it rest for a cool 4 hrs before I made it into anything. I noticed the luke warm water had kind of cooked tha sabudana a bit and I had to drain the extra water to avoid getting sticky sabudana. I decided to make Sabudana Thalipeeth. I think this thalipeeth came into being when the sabudana decided to take revenge on the khichadi maker. The recipe is forgiving, unlike the sabudana khichadi recipe that needs perfectly soaked pearls. The thalipeeth satisfies the craving for Sabudana Vadas with its crispness without giving you the guilt of deep frying.

In a large bowl put all the ingredients together and knead into a dough. Keep aside.

Take 2 non stick pans and grease them with ghee. Now divide the dough into 4 large parts. Each will yield a chapati sized thalipeeth. Take one part and roll into a ball. Now press the ball onto the greased frying pan. Wet your hand with water and spread the dough thin without creating cracks and holes. Cover and cook on medium heat till the sabudana looks translucent. Check if it has turned golden on the lower side by lifting it slightly with a spatula. If it is golden then it should turn over easily. If you do not want it crisp and want to keep it soft cover with a plate and overturn the pan then slide it back into the pan to toast up the otherside. Use up the remaining dough.When cooked from both sides serve hot with coconut chutney or curd. I like mine toasted crisp and Dad his semi soft.