This is a story Yesu Aaji (my father's mother) would tell us at bedtime when she felt that we were pampered kids bred in the city of Mumbai. The story teaches you to value what you have and be sympathetic towards the less fortunate.
Naarya lived in Thal with his widowed mother. Their home was a hut made from Zaap the coconut leaves woven to form panels and dry hay that was used to thatch the roof. This was a sure sign of their condition. It just had one room with a smoldering chool in one corner. There would be a big black pot of pez (gruel) cooking on it all day long. If on someday Naarya's mother was not able to earn anything that meant no vegetables or fish. Then the pez would fill their stomach all three times a day. Above the chool there hung a shika (choir pot hanger) in which was a basket with a few pieces of stale Chavlachi Roti. At times when Naarya cried for roti his mother dipped the stale and hardened roti in hot water to soften it and would serve to him.

It was the time of Dattachi yatra (Datta jayanti). There was a fair at the temple on the outskirts of Thal. Men and women took their children to the fair. While returning everyone seemed to have conical packs of peda and paper wraps.

Naarya asked one of his friends what it had in the paper wraps. They said with a twinkle, "Bhurgulyache Ladoo"(puffed rice and jaggery balls). Those were the times when even simple things like that meant so much to the kids unlike today's kids who demand for cheese to snack on.

Naarya felt sad that his mother did not have money to send him for the fair. He was dejected and pulled a blanket over his head and cuddled in one corner of the hut. His mother came home from the bunder(fish drying fields) and found him sobbing. The mother ran to him instantly and asked him what was wrong. He refused to tell. He was a mature child and knew that his mother would not be able to provide what he wanted. Finally he told his mother how he wanted to taste Bhurgulyache Ladoo.

His mother went to the chool and put her hand in the dark konada ( a cove in the wall) which was her safety locker and found just one bronze coin with a hole.

She told Naarya to go to Tambat the grocer and do as instructed. Naarya went to Tambat and told him that his mother wanted to make Bhurgulyache Ladoo so he wanted Bhurgule and Jaggery. Tambat was a cunning man. He asked Naarya how much money he had. Naarya told him he wanted just as much amount of Bhurgule and jaggery that fitted in his ears. Tambat thought that's all. He took the coin with the hole and asked Naarya to go to the back and fill his ears with Bhurgule and to his suprise it did not fill with 1 pav sher so he shoved in another pav sher. Then he filled the other ear with jaggery half sher again! As he waved a goodbye to Tambat and thanked him he skipped with happiness towards his hut. His mother was waiting for him.

She carefully removed the Bhurgule and jaggery from his ears. She had a smile on her face as she was now going to make the ladoos for her son that he so desired.

I meant to share the recipe of Bhurgulyache ladoo but it needs some perfection so till then sharing the picture. 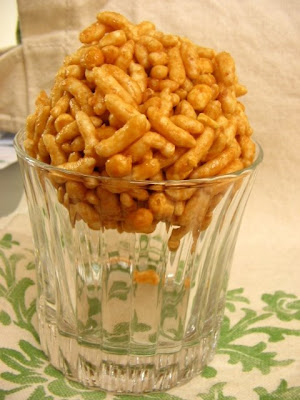 Email ThisBlogThis!Share to TwitterShare to FacebookShare to Pinterest
Labels: Folklores and Tales from the Land of Thal